District Finances Soar or Fall Depending upon Measure 97

PAT has been participating in conversations around the District’s budget process for the next biennium. In those conversations we were given the following estimate of District finances with and without the passage of Measure 97. 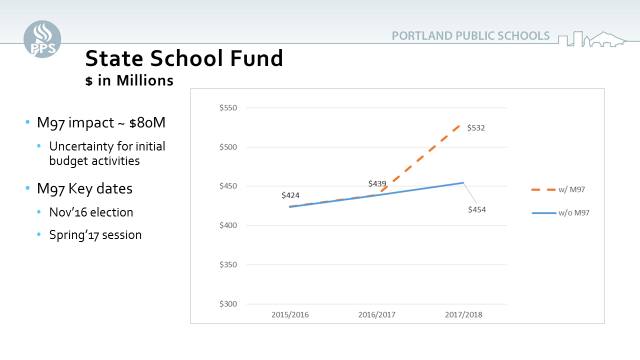 If Measure 97 passes, the annual impact on the PPS budget could be as high as $78 million. PAT believes that these projections are conservative. Starting in 2017-18 the District will also incur new obligations such as increased PERS costs, increased salaries and benefits, the implementation of new state PE requirements, and the possible implementation of new CTE/vocational ed requirements (should Measure 98 pass).

Overall Staffing Flat without 97, but Unfunded Mandates May Force other Programs to Be Cut

This same budget group received a report showing that staffing for the 2017-18 school year is projected to be flat if Measure 97 fails. It was noted that the District is required to implement new PE requirements that would necessitate the hiring of multiple PE teachers. Additionally, if Measure 98 passes, the District would need to redirect resources to hire more CTE/vocational teachers. The District did not say which staff/programs would be cut to hire additional staff for these unfunded mandates.

Members’ top priorities on our bargaining survey included workload relief, safety and compensation. The degree that we are able to make improvements in all three depends on District revenue.

Workload relief includes reducing class sizes and caseloads. It also includes adding time to prepare and plan. With the additional PE mandate going into effect in 2017-18, this will put pressure on our workday language; especially at the elementary schools. With added resources, we could explore securing guaranteed prep time during the student day for PK-5 members.

Safety continues to be a top priority. We have struggled with the implementation of our first set of IBB agreements. One of the areas that was not fully funded was the newly created Rapid Response Team. This team is designed to stabilize crisis situations for students and teachers. Unfortunately, the available staffing of the team does not meet the demand.

After years of deficit budgets, PAT salaries and benefits have increasingly fallen behind competing districts. We routinely lose candidates to other districts because members are able to earn significantly more salary by moving. This has hit several hard to fill job categories especially hard; increasing the caseloads/workload for those who remain. PAT and the District are looking at ways to increase compensation to make salaries more competitive.

If Measure 97 fails, we will continue to fight for the school Portland students deserve. But we expect more of the same: hard battles over competing budget priorities. With Measure 97, we can make real progress towards reducing class sizes/caseloads, reestablishing support services and electives in all schools, stabilizing staffing by making compensation more competitive, and providing resources to support students to be safely included in schools (not to mention, books, lead, radon and materials for you to do your job).

PAT and PPS had scheduled an interest based bargaining (IBB) consensus lab on October 27- 28. The purpose of the lab was to finalize as many consensus agreements as possible at this stage in the process and then bring those agreements to the membership and the Board for ratification. Unfortunately, the District cancelled the dates in order for some of its participants to attend a conference. The consensus lab will be rescheduled in early December.

In the last month PAT discovered that the District was allowing around 150 members to opt out of insurance. This means that the District is saving approximately $4.5 million in insurance premiums required by our contract. There is also a new Affordable Care Act (ACA) rule that may trigger a $10 million penalty if the District does not allow opting out. PAT offered a compromise that would eliminate this added cost to the District. A joint IBB sub-committee including Board of Ed member Paul Anthony, CFO Youself Awwad, PAT President Suzanne Cohen, PAT Treasurer Al Rabchuk and PAT UniServ Consultant John Berkey recommended a solution that included putting the PERS Bubble Agreement in the contract rather than having to agree to a Memorandum of Agreement every year. The joint sub-committee also agreed to restore the early retirement insurance and stipend to all members. We believe that both of these solutions would actually save the District money. Unfortunately, HR Director Sean Murray nixed this agreement. Currently we have no agreement on opt out, early retirement or the PERS Bubble. We are working to see if the District will produce a counteroffer.