Lessons from the 2011 Wisconsin Uprising

The uprising began on Valentine’s day 2011, in response to Governor Scott Walker’s introduction of a bill designed to destroy public sector unions, an opening salvo in his war to slash public services.  Tens of thousands of union and community members occupied the capitol and tens of thousands more engaged in a series of marches and demonstrations over a four-month period. How did the movement grow so fast? What role did unions play? What were some of the strategic choices made by unions and working people in their struggle against the right in Wisconsin?

Come hear Nikki Mandell (former Associate Professor of History at the University of Wisconsin-Whitewater) and Rick March (former Wisconsin state employee serving as the folk arts specialist at the Wisconsin Arts Board), both participants in the uprising, reflect on these questions and share insights relevant to building resistance to the current attack on unions and working people.

For more information, call Jobs with Justice, 971-242-8702 or visit the event facebook page 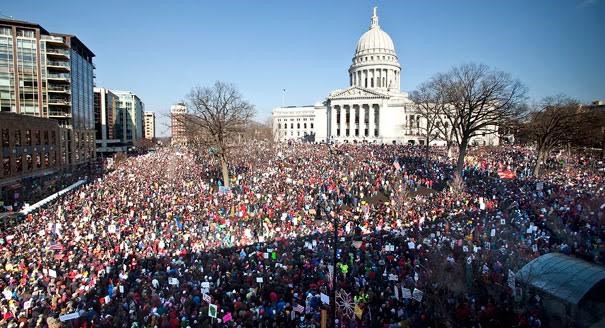